Ellen Ritter, who will turn 70 in March, was happy to be moving into her new home in Hampstead this week. Originally from Maryland, Ellen has moved a few times since her husband passed away in 2014. On this latest move, she had travelled from Georgia to Hampstead to live closer to her brother and niece.

As she moved in Feb. 8, the weather was chilly and there were several patches of ice on the ground in her driveway. Ellen was in the process of transporting her beloved domestic long-haired 10-year-old all-black cat Sammy into his new digs when he wriggled around a bit and Ellen lost her footing, hitting the pavement hard.

Fortunately, CJ Miller Excavator Operator John Decker, who was working directly across the street on the Hampstead Streetscape Project, witnessed the fall. He shouted over to CJ Miller Top-Man Phil Larose, who quickly ran to the woman’s aid.

“I heard the man yell ‘hey that lady fell,’” Ellen said. “And the gentleman who helped me reached me in no time. I asked him if he could get Sammy inside and he scooped him up and put him inside and I was at peace at that point.”

Phil helped Ellen inside her home and retrieved her purse for her. She is a bit sore, but considers herself lucky that she was not seriously injured and that she had help so close by.

Phil, who has been a volunteer fireman for the Nashville Volunteer Fire Department in Spring Grove, Pa., for the past seven years, didn’t hesitate to come to Ellen’s Aid.

An employee of CJ Miller for just under five months, Phil will be issued a special safety sticker, which is presented to employees who distinguish themselves for operating in a safe manner. Good looking out, Phil! 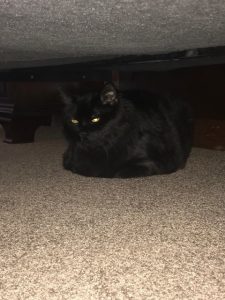 Sammy the cat is safe under the bed in his Hampstead home. 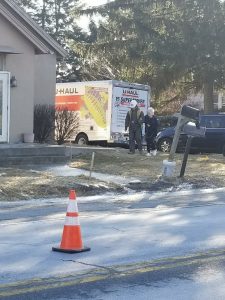