You are here: Home1 / News2 / CJM Employee Alerts Family To Tree On Fire 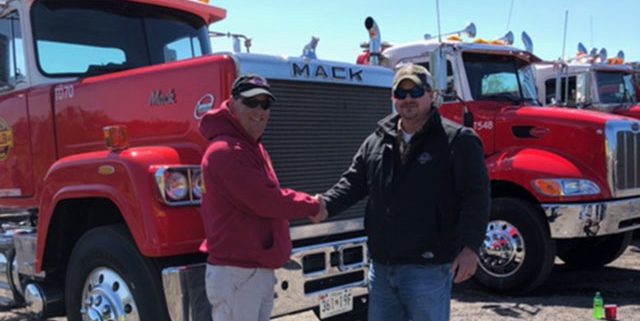 At CJ Miller, employees often joke that there is no such thing as a “predictable” day in this industry. That certainly proved true for CJ Miller Sweeper Truck Driver Bill Miller on a recent workday. Bill, who has been a volunteer with the New Windsor Fire Department for 25 years, was turning his truck around early in the morning at a paving job in Sykesville, when he spotted a large tree in someone’s front yard that appeared to be burning.  Upon closer inspection, Bill realized the tree must have been struck by lightning by a storm the previous evening and, unbeknownst to the homeowner, was actually on fire.

Bill stopped and called the fire department and then knocked on the family’s door. When they did not respond, he went and alerted their neighbors, who let the family know. The homeowner, Linda, was so grateful for Bill’s help, that she called up CJ Miller to personally thank him.

“Heaven knows what would have happened if he had not noticed,” she said, pointing out that from her vantage point from her front window, the tree looked completely intact. “It was a big old tree and if it had burned all the way through, it could have fallen on the house.”

She said the fire department came out and a tree service was scheduled to remove the tree that afternoon. “I just wanted to thank your employee,” she said.

Bill, who is starting his sixth year at CJ Miller and started volunteering with the fire department when he was 19 said, “I just enjoy helping people.”

For his quick thinking, Bill was presented with a CJ Miller Safety Award. We are so grateful to our employees for their service to the community, both on and off the job.