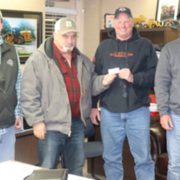 Every winter, when our paving and excavating operations slow due to cold temperatures, CJ Miller LLC strives to provide employees with snow removal opportunities. As we all know, snow has its own schedule, arriving and finishing when it pleases. This winter we have had multiple snow occurrences, and we are grateful to the team effort in providing snow removal throughout the county and additionally at Washington Dulles International Airport.

One employee in particular, Buddy Petry, voluntarily stepped up on multiple occasions, making himself available to pretreat roadways as well as the parking lots at CJ Miller. As a thank you for going above and beyond this season, Buddy has been awarded a special safety sticker for his efforts. We are thankful to him and all of our snow removal teams at CJ Miller! 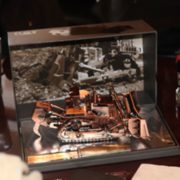 When you’re like CJ Miller Foreman Kevin Bitzer and have worked at a company for more than 40 years, you have some stories to tell. Some are perhaps not fit for print, but there are plenty of others that Kevin shared during a retirement lunch in his honor March 1.

Kevin explained that when he started, the current President, CJ Miller III was about 5 years old. Kevin, known by those close to him as “BullCalf,” joked about his nickname and talked about his favorites of the hundreds of jobs he has done in the course of his career. He spoke about the Staples in Sykesville Park, Beachtree, the Walmart in Westminster, and the Shelter Systems project.

“We had nine scrapers and six backdumps and moved 26,000 cubic yards of dirt that day and that was before we had GPS,” Kevin said of the Shelter Systems job.

“We aint’s got enough hours in the day … we could talk, talk, talk,” he said of his experiences at CJ Miller.

Kevin was joined at the lunch by his wife, daughter and son, who is also a CJ Miller Foreman. As a token of presentation he was presented with a CAT model D11, and a coworker presented him with a Master Key for Caterpillar – a hard-to-find Collector’s item.

We wish Kevin the best in retirement and thank him for all of his years at CJ Miller. 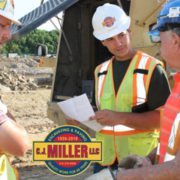 Are you looking for a company where you can build your career? Have you ever thought about working in construction?

Here’s a few reasons you might enjoy working in this industry:

If you think a career in construction could be for you, visit our job fair at 3514 Basler Road on Thursday March 14 from 2 to 6 p.m. Please bring a copy of your resume.

We are hiring Tack Truck Drivers with a CDL license, Loader Operators, Triaxle Dump Drivers with a CDL, Paving and Milling Machine Operators, Roller Operators, Pipe Layers, Concrete/Curb Finishers, Traffic Control Managers, Asphalt Testers and more.  A good pair of boots and a great attitude can take you far in this company. If you’re interested in a great career with great benefits, visit us at our job fair Thursday  March 14 from 2 to 6 p.m.